Every now and then, an Android phone comes out of left field and surprises everybody with how good it is. The latest example is the Asus ZenFone 6, which you may have seen, thanks to its unique gimmick: a rear camera that flips up to become the selfie camera. It’s one of the many clever ways phone companies are trying to make a truly edge-to-edge screen, and you’re virtually guaranteed to get a reaction when you show it off.

The ZenFone 6 is a $499 phone — $599 if you want upgraded RAM and storage — and the bar for phones at that price point is significantly higher than it used to be. It’s not enough anymore for even a “budget” phone to nail the basics. It has to have something that sets it apart and above the slew of other sub-$600 phones. You probably think the ZenFone 6’s camera-flipping trick is its main feature, but that’s not my favorite thing about this phone.

The best thing about the ZenFone 6 is the battery life, which is astronomically good. 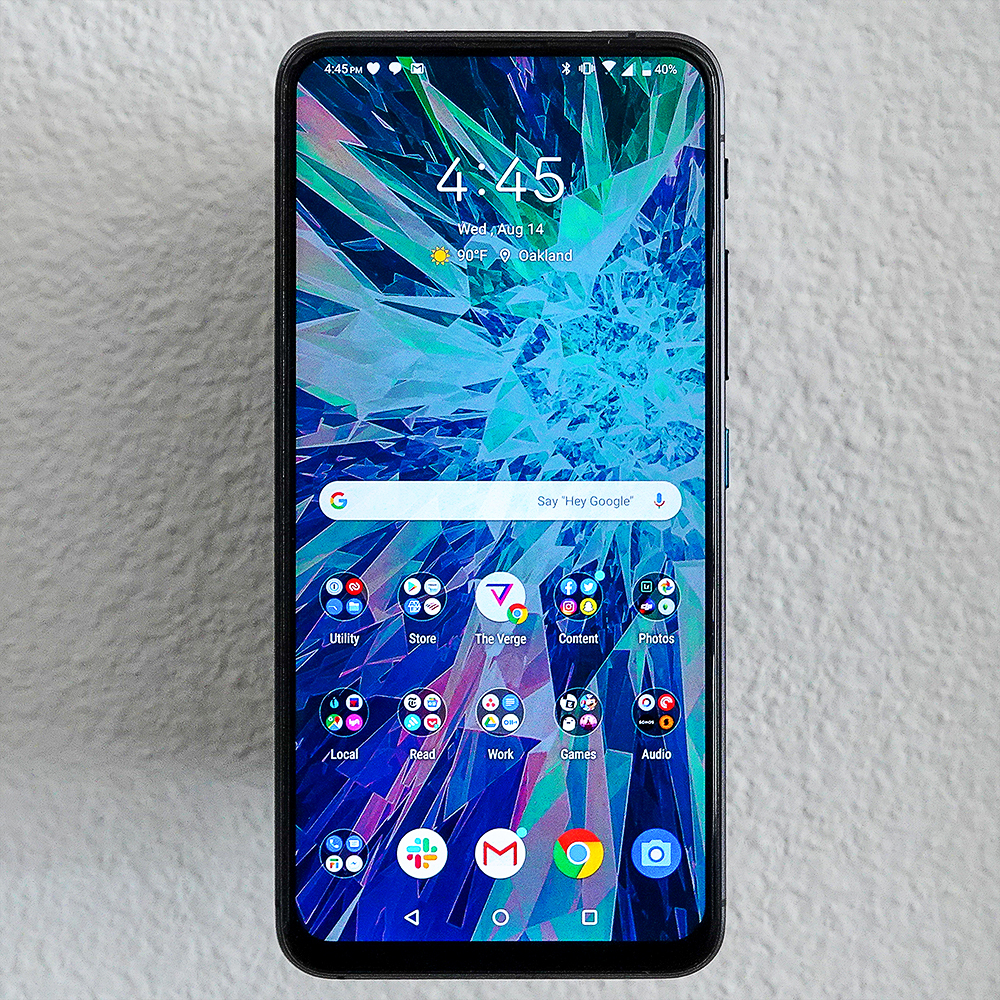 The ZenFone 6 is a big, thick phone. It has a 6.4-inch screen, but thanks to minimal bezels, it’s not quite as chunky as it might otherwise be. I found it hard to use one-handed and was surprised to see that it weighs less than an iPhone XS Max because it feels way heavier.

But the benefit of making a big phone means that Asus could fit extra stuff inside. There are all of the mechanics required to get the entire camera module to flip out from the back to the front. There’s a 5,000mAh battery that will last forever; I’m getting two days of pretty heavy use with no problem. (That’s eight to nine hours of screen time, as Android counts it, including hours of network- and processor-intensive games.) Brute force may not be the most elegant solution to extending battery life, but until battery technologies improve, it’s certainly the most effective.

All that space also means there is a headphone jack, which is increasingly rare but apparently still considered necessary on midrange and lower-end phones. Asus couldn’t fit wireless charging in there, but that might be more of a cost decision than a space problem. Besides, charging a 5,000mAh battery at wireless charging speeds sounds like a nightmare. Apparently, Asus could have chosen a smaller battery with faster wired charging speeds than the 18W it supported, but it opted to go with the bigger battery instead.

I’m glad Asus decided to make that trade-off. In fact, I’m glad about a lot of the trade-offs that Asus made with the ZenFone 6.

The screen is a perfect example. It’s huge, but it’s only 1080 x 2340, so it’s not as tack-sharp as screens on other phones. It’s also an LCD instead of OLED, which means the blacks are less black and it’s difficult to see outdoors, but both choices mean that the ZenFone 6 can be less expensive. The lower-resolution screen also means that the phone needs to push fewer pixels, which is a significant boon to the battery life.

Asus pushed the screen out close to the edge of the phone, yet there’s still a bezel because getting rid of those last few millimeters means adding a few hundred dollars to the cost. But for all that, the screen still looks impressive because it’s big, the bezels are small, and there’s no notch or camera cutout.

Asus cut costs without making it feel like a cut-rate phone. There’s a fingerprint sensor on the back, which is glass but feels almost like metal. The phone feels good and solid, but you can definitely find the seams between the different parts that make up the body. Compared to the $479 Pixel 3A XL, the ZenFone 6 is a huge upgrade in every way but one: the camera.

All right, I’ve made you wait long enough: let’s talk about that wild camera. It flips! There’s a 48-megapixel main sensor paired with a 13-megapixel wide angle lens. Flipping it around means you get the high-quality cameras for your selfies instead of whatever tiny little thing can fit above or inside the screen on other phones. Plus — and I cannot emphasize this enough — it flips.

Obviously, I can’t speak to its durability over time, but it seems solid after a week of use, and Asus has given the usual promises that it’ll hold up. The phone doesn’t have a rated dust or water resistance IP number, so I’d avoid letting either get anywhere near the mechanism. It’ll also auto-flip back to its home position if it detects a fall.

It doesn’t move as quickly as you want, taking maybe a second to do its thing, but that’s only a half-second longer than many camera apps take to switch over to the selfie camera anyway.

Beyond showing off the flip to your friends, you can also move it manually using the volume keys. That means you can hold the phone in different positions to get your shot. One thing I figured out early on is that it can be a little creepy. You look like you’re holding your phone to text, but really, the camera has subtly flipped out so you can take a photo, like so:

The rule for budget phones used to be that no matter how nice everything else was, the camera was crap. The Pixel 3A broke that trend, and while I think the 3A is better than the ZenFone 6’s dual-camera setup, it’s not by much. The ZenFone 6 kicks out 12-megapixel images by default that are surprisingly good for a phone in this price range.

Its photos are not as contrasty as the Pixel or as impressive as the OnePlus 7 Pro, but in decent lighting, it was sometimes more of a matter of preference than quality between these phones. One thing to know is that, in dim lighting, the ZenFone’s camera falls down, at least when compared to the Pixel.

But with selfies, well, the ZenFone stacks the deck by using its main sensors, so those photos are consistently better than what you’re probably used to. I’ll also note that I like Asus’ camera software — including the easy-to-understand beauty modes — but knowing what results you’ll get between “Auto HDR+” and “HDR++” modes is a bit of a crapshoot.

One of the reasons this felt like such a surprise is because it didn’t come out of nowhere. It came from Asus, which has a mediocre track record with phones. But it has cleaned up its act with the ZenFone 6, significantly changing its software philosophy to focus on less intrusive features. Like Motorola, Asus has made its version of Android feel very close to the vanilla version that you get on a Google Pixel, with extra features tucked away in obtrusive places if you want them.

There’s a game mode, but it doesn’t bother you if you don’t want it. You can choose between a few different core navigation features. There’s wacky stuff for making duplicate versions of apps, using AI to optimize memory usage, and a bunch of other stuff that you may never use. (But at least they’re buried in settings instead of in your face.)

I really love the wonderfully programmable extra button that you can set to do lots of different things. Sadly, Asus put it at the top-right of the phone, so it’s nearly impossible to reach.

The Asus ZenFone 6 is the best option at 500 bucks — as long as you don’t mind a big phone.

You can get a better camera or a nicer screen for a couple hundred dollars more with the OnePlus 7 Pro. You can spend a couple hundred dollars more than that to get phones that are genuinely luxurious, like the iPhone XS or the Samsung Galaxy Note 10. You can spend way less and get a slower processor or a smaller phone. Even though it seems like your phone choices are dwindling, that’s not really true. There are tons of options.

It can be hard for a phone to justify its existence among so many options, but the Asus ZenFone 6 totally has. It is a battery champion for not too much money that doesn’t sacrifice the stuff phones usually have to, like screen size, the camera, or speed.

The flippy camera is a neat trick, but the real magic is getting the things people actually want into a $500 phone.

Vox Media has affiliate partnerships. These do not influence editorial content, though Vox Media may earn commissions for products purchased via affiliate links. For more information, see our ethics policy.

Photography by Dieter Bohn / The Verge

The More Competition, The Better

Why intellectuals are scared of ‘cancel culture’

Young people, who found an outlet for creative expression in TikTok amid lockdown, say a US ban would be devastating, as some flock to...

What Is Spotify Duo, and Is It Right for You?

Fans are upset with Crysis Remastered’s graphics, so Crytek is delaying the game

What Counts as a Streaming Hit? A Start-Up May Have Answers

How to set up and use email templates in Gmail

How the San Jose Sharks Score With Fan Experience

What 13 Highly Successful People Like Warren Buffett and Donald Trump...

9 Business Ideas for People Looking to Cash in on the...

It’s Coders Versus Human Pilots in This Drone Race

The Video Chief of a 200-Year-Old Newspaper on Transitioning to Digital,...

Fear, Anxiety and Hope: What It Means to Be a Minority...